After many months of e-mail contact with firstly Pat Mercer and then Viv McNeil, arrangements were made for a group visit by members of the Dutch Pygmy Goat Federation (NFD) which was organised through the editor of their magazine Evert Jan Regelink.

The group of 17 arrived via ferry from Harwich on Friday 10th June and then they made their way to the South of England Show at Ardingly on the Saturday morning in time to watch one of our pygmy goat shows in place. The judge of the day Pam Germany was introduced to the group, who mainly spoke good English, and she was able to explain her placings in between each class. I know the group appreciated this very much and were impressed with her judging.

It was extremely interesting to chat with the group and compare things such as conformation which is considerably different to our goats, as well as management/ husbandry and the way the animals are judged etc We learned that one of their bigger shows averages an entry of around 450 animals while smaller ones might have 100 entries ! My counterpart – Registration Officer – was amongst the group and he told me that he processes around 2,000 goats each year. Another striking difference was how many men are involved in showing goats – it seems to be a predominantly male pastime. Although it is a popular hobby they do not class their goats as pets, I was told that their surplus kids are sent to market.

There is very little financial gain – average price being around £20 for breeding stock (they gasped when I told them our prices !) Their movement regulations following F&M are much more prohibitive than ours. Their standstill period between shows is 21 days and before each show they have to have a veterinary check on their animals, paid for by themselves ! (Be grateful for our regulations) On the Sunday morning the group went along to Viv’s home to view her goats and afterwards came down to visit me and mine.

The group were fascinated by my group of 7 adult male pygmies living happily together – unheard of in Holland apparently as they would fight. After much video filming and photo’ taking we made our way to a local pub for a lovely lunch and then it was time to say goodbye to our new friends. We were invited to visit Holland and hopefully we can arrange something in the future. I will keep you posted…….. Hilary Breakell 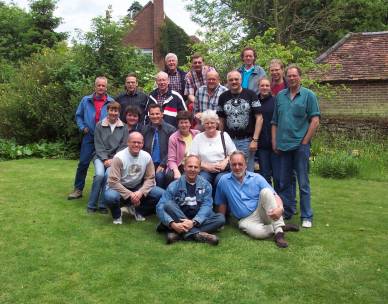 Designed, Hosted and Maintained by JRFComputing